Ely began as a railroad town for pioneers, a marketplace where area settlers could sell their goods and buy necessities. Its history before that is similar to other farmlands across the great prairie area.

Ely joined the United States as part of the Louisiana Purchase and became part of the Wisconsin Territory until July 4, 1838, when the Territory of Iowa was established.

[We really don't know who the first European settler was but some of the first in the area were Christopher Fuhrmeister, who came to the U.S. in 1838 from Germany and John S. Holler originally from Indiana, then Illinois, in 1839.]

Fuhrmeister came to Iowa after hearing about the fertile land available and settled along the southern edge of Ely. In 1842, he returned to Germany to bring his wife, four sons and daughter to their new home. To build a larger house for his family, he began the area's first business--a sawmill.

To the southwest of Ely, Valentine Fackler and his family settled in 1840 in a wooded area that would be known as Fackler's Grove. The family had started in Ohio, moved to Indiana, came to Iowa in 1837 in Louisa County and then settled in the Ely area.

Brothers Robert [Robert Rodman Rogers] and Daniel Rogers settled about two-and-a-half miles northeast of Ely with their families, and about seven of the 55 pioneers who settled in the Linn County area, came south of the Cedar River around 1838 [settling in what came to be called Rogers Grove]. Since the nearest market for the farm goods was Muscatine, 60 miles to the south, there was an inducement to establish a town in the area.

[Note: Robert and Daniel Rogers were sons of Thomas and Anna (Rodman) Rogers. Both Robert and Daniel, and many others from the Rogers families, are buried in Rogers Grove Cemetery, northeast of Ely.]

Land where the city itself was eventually located was originally owned by John S. Hollar, who also came to the area from Illinois in 1839 with wife Priscilla and their family. Ely proper was plotted on the eastern part of 480 acres of prairie and woods that Hollar had bought for $1.25 an acre. This area was called "Hoosier's Grove". 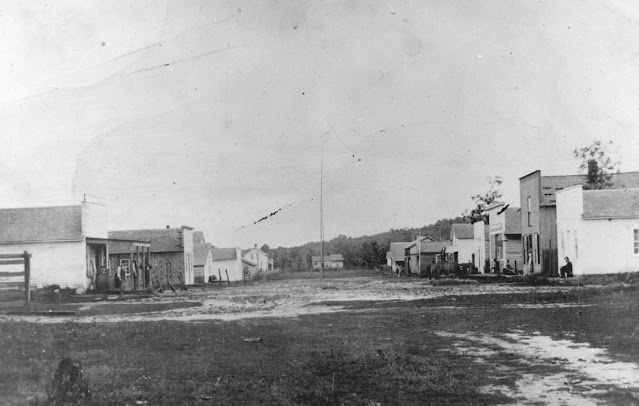 One of the earliest photos of Dows Street in Ely.  It probably taken pre-1890 and looks west down Dows. The house that appears to be in the middle of the street in the mid-background is where the convenience store stands today.

Planning began in May 1872 when the Burlington, Cedar Rapids and Northern Railroad Company bought 60 acres from Andrew Fuhrmeister to lay tracks though the area, and Ely was laid out June 5, 1872, under the proprietorship of Dr. John F. Ely, treasurer of the B.C.R. &N.R.R., vice president of the Union Bank and one of the directors of the First National Bank of Cedar Rapids. Ely was born in New York and lived either there or in Michigan before settling in the Cedar Rapids area.

The first business in the town was a general store built by William S. Cooper before the town was laid out and the railroad came through. Cooper built it on the southwest corner of Main and Dow streets, where the post office is today. The post office was established April 20, 1871.

Growth happened fast between 1872 and 1878. Andrew Fuhrmeister established a grain warehouse. Jerry Smith built the Smith and Healy general store. J.E. Dolezal opened the first saloon in Ely. The railroad constructed a depot. L.M. Healy opened the first hotel in 1873. E.H. Brumbaugh came to Ely as the town's first physician. The area was becoming predominately Czech by 1878, too. Of the 250 inhabitants of the area, half were of Czech, or Bohemian ancestry.

Ely became an incorporated town on Aug. 12, 1903. The first mayor was George L. Kent. The city council members were J.C. Dvorak, N.J. Jordan, Joseph Novotny, John Asenbrener, M.D. Vanourny and Godfrey Truhlar. The first treasurer was Joseph Holets; the first recorder was Joseph Lorenc; the first marshal was Frank Janko. The incorporated area covered 200 acres and 51 residences with a recorded population of 200 residents, of which 47 were eligible voters. The first act of the new government was to clean up the municipal area, including building sidewalks along the four blocks that were the business district. The first phone service was started in 1903 and completed in 1904.

The first electric plant was built in 1920 by voluntary subscription.