Ed Vavra posted this on our Facebook page February 19, 2021

A DISASTROUS FIRE - Wednesday morning of last week, about 4 o'clock, during that fearful cold snow and wind storm, the residence of Richard Scott near Ely, was burned, with all the goods it contained.

Mr. Scott was awakened by the roaring of the flames and had but barely time to seize the little ones of his household, who were quietly sleeping in their beds, and forcibly threw them out of the door into the storm ere the roof fell in and the house was in ruins.

The family consists of eight children, ranging in age from 15 to 2 years, and the only articles of clothing they saved was the night clothes they had on, except that the oldest daughter secured one of her dresses.  Fortunately, Scott, in gathering up the children, gathered a portion of the bed clothes with them; otherwise they would have been utterly unprotected from that biting storm.

Barefooted and naked, except the scanty underclothes and the meager supply of bed clothing they secured, the little ones wended their way to Mr. G. C. Stream's, where they were hospitably provided for.

After the 1877 fire, the home was rebuilt closer to the road where Mr. Scott lived until he remarried in 1887; at which time he relocated to the Palo area. He died at the home of one of his children in 1917.

Despite the hardships of life, Mr. Scott was known to be a good and kind-hearted man. As one story goes, Mr. Scott took his friend and neighbor George Clarkson into his home after the death of Mrs. Clarkson.  Mr. Clarkson was penniless and lived out his days with the Scott family until his death.

The stone (below) in Rogers Grove Cemetery marks his resting spot and is inscribed "Erected by Richard Scott". 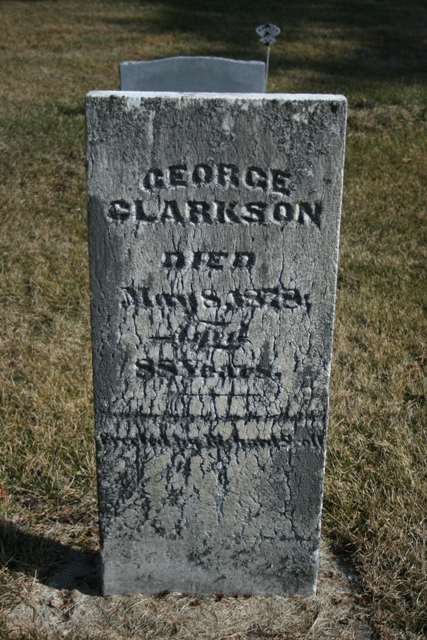 Richard Scott was buried in East Fairview Cemetery, Lenox, Taylor County, Iowa. His first wife is buried in the woods West of Ely.