About Ivanhoe and the Wolfe family

We all know about Ivanhoe Road that you encounter when you head north out of Ely on Jappa Road. But many may not know that this is a very old road. It once was more of a trail used by early pioneers, and was named Ivanhoe because of the Ivanhoe Ferry that was used to cross the river at what is now Highway 1 south of Mount Vernon. And it was the Ivanhoe Ferry because there once was a town there.

According to the 1911 History of Linn County Ivanhoe was never platted, but was only a squatter town. "Colonel Merritt kept the first store at Ivanhoe for parties in Rock Island.  This town had better prospects of becoming a great city than any other town in the county.  It had a good river frontage, a rich country around it, plenty of timber and good water, and had the government road besides. For some unknown cause the place seems to have been ignored when Marion and Cedar Rapids began to flourish."  (p. 271 vol. 1) 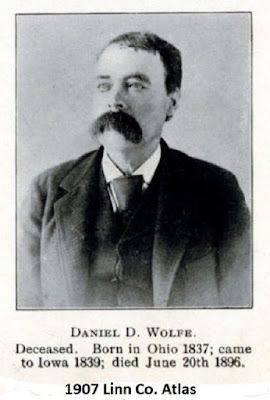 DANIEL D. WOLFE, one of the highly esteemed and prominent residents of Franklin Township, occupies a fine farm on section 31. He was born in Seneca County, Ohio, Oct. 4, 1837. His father, John Wolfe was also a native of Ohio, and emigrated to Iowa while it was still a Territory. His grandfather, also John Wolfe, was a native of Pennsylvania and a descendant of German ancestry. He removed to Ohio at an early day, and located in Seneca County, where he remained the balance of his life and passed to his rest in 1855.

JOHN WOLFE, the father of our subject, was reared on his father's farm in Ohio, and married in the county of his birth, the maiden name of his bride being Miss Annie Dildine, also a native of the Buckeye State, and born in Fairfield County.

JOHN WOLFE came to the Territory of Iowa in 1839, and made a claim in Cedar County, where he remained until the following year, and then returned to Ohio for his family, which consisted of his wife and four children. They made the journey overland to their new home and located upon the claim, which, however, they only occupied for a short time.

Mr. Wolfe had visited Linn County in the meantime, and concluded that he could secure a more desirable location there. He accordingly made a claim on section 12 of what is now Bertram Township, but removed the following year. He then made a third claim on Cedar River, which comprised a part of sections 27 and 31. 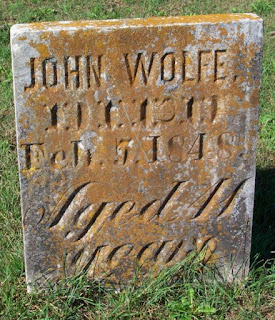 He also purchased the ferry which was used to cross the river at this point, and as he surmised, a village soon sprang up at this point, which was named Ivanhoe. He erected a large boat-house, fitting up a part of it for a habitation, opened it to the public, and kept the first pioneer "hotel" in that region. He continued thus occupied the greater part of the time until his death. He entered his land from the Government, erected a dwelling-house on section 31, and when not engaged with his hotel business employed his time in the cultivation of his land.

At the time of his death, in 1854, he was living at the brick hotel in Ivanhoe. His widow survived him several years, and died on the home farm on section 30.

Mr. Wolfe was a prominent man in his community at that early day, and a leader among the early pioneers. He was the first Justice of the Peace in this section. The household of Mr. and Mrs. John Wolfe included nine children, six of whom grew to be men and women: Rhoda, the eldest daughter, married J.S.F. Bryney, and is now deceased; Sarah R. became the wife of G.W. Harvey, and lives in Washington Territory; the next son was Daniel D.; a daughter, Melissa A., married Aleck Gregory, and they live in Missouri; Laura A. became the wife of George Klinick, and they are residents of Linn Township; Squire W. was the youngest son.

DANIEL D. WOLFE was a child of three years when he came with his parents to Iowa, and may properly be said to have grown up with his county. He was still but a boy when deprived of a father's care, and he made his home with his mother until his marriage, which occurred in January, 1860. The lady of his choice was Miss Elizabeth Dill, a native of Knox County, Ill., and daughter of John and Mary Dill. At the time of his marriage he was running the ferry across the river at Ivanhoe, carrying on business which his father had established there a number of years previously.
In 1863 he sold his ferry and engaged in farming, three years later removing to Solon, Iowa, where he engaged in the grocery trade. After two years he went east to Seneca County, Ohio, having disposed of his grocery, and was there engaged in the timber tract, getting out ties for the railroad which was then being built, and at which he was occupied for a space of eighteen months. In the meantime his brother, Squire, had purchased the ferry, with which he had heretofore been connected, and our subject going back to Iowa, became joint manager of the old business until the building of the bridge. It was again called into requisition on account of the bridge being carried away by high water, during which they ran the ferry one year. Since that time the brothers have been continuously engaged in agricultural pursuits, and have become joint proprietors of a farm which contains 480 acres, and comprises a part of sections 19, 30, 31 and 32.

SQUIRE W. WOLFE is unmarried, and has made his home with his brother Daniel since he has been associated with him in business. He was born in Franklin Township in 1844, and remained with his mother on the old homestead until her death.

The brothers Wolfe are gentlemen still in the prime of life, and with a prospect of many years and continued usefulness. They are classed among the solid citizens of Franklin Township, and are among the leading men of the community. They are honorable and upright in their business transactions, and their farming operations are carried on with system and good order. Their homestead is a model one and an ornament to this section of country. 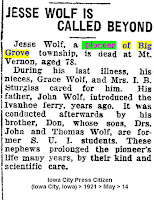 Wikipeida says: Unlike other towns founded around that time on the Old Military Road, Ivanhoe faded away; many of its residents relocated to Mount Vernon, Cedar Rapids, or Marion. The February 1921 edition of The Palimpsest describes the area as having been "a refuge for horse thieves and dealers in counterfeit money", though it is unclear whether that was during the time that the town existed or afterwards.

Besides the cemetery there are no standing structures left of the old town. 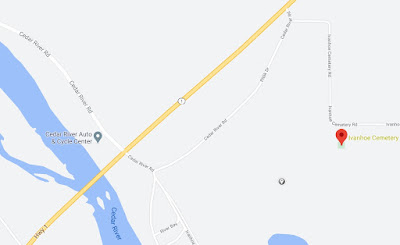