For many years the town of Ely's population consisted mostly of people who originated in what is now known as the Czech Republic. One of Ely's customs was the celebration of St. Joseph's Day on March 19th. St Joseph is the patron saint of the Czech people.

From the Solon Economist, March 24, 1949.Click the article to enlarge it. 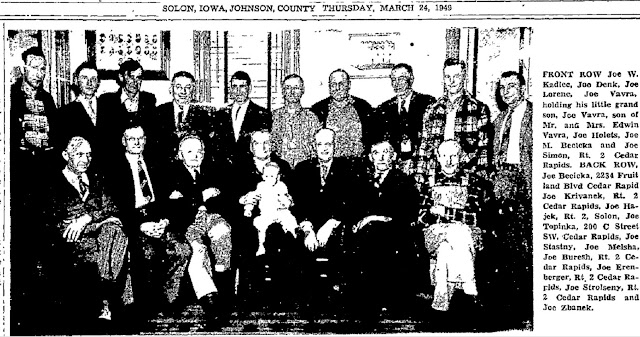 Thanks to Ed Vavra for sending the original of this photo for us to see. Ed is the son of "Little Joe" in the photo! Click to enlarge it. 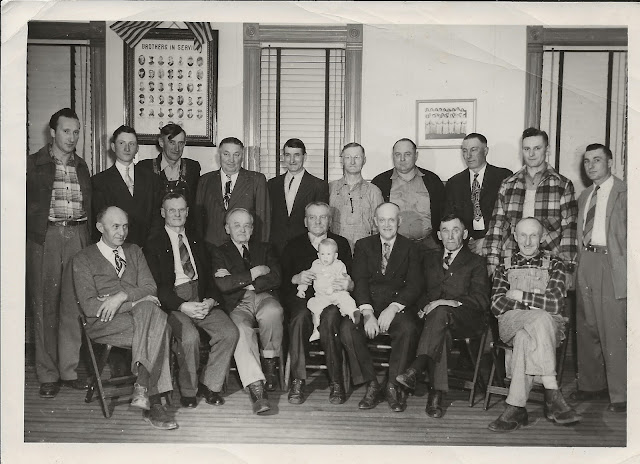 Ely 'Joes" Observe St. Joseph's Day
By Katherine Worley
Just like the rains seem to uncover mushrooms in the spring, March 19 brought out in our community every man identified by the name of Joseph to take part in a festive celebration honoring the Saint's name.

On Saturday night in the I.O.O.F. lodge hall the Josephs congregated again to observe St. Joseph's day in much the same manner as they have for many years. Business men and retired farmers from miles around gathered to take part in a custom that was brought over from the old country.

The oldest Joseph in Ely, Joseph Becicka, a retired lumberman, is the only man who came over to this country as a child who can remember how the patron saint's day was celebrated in the Czech country. He has told his friends over here that it was the custom in the villages to go out and serenade the Josephs and Josephines and collect a few cents for refreshments. There were always a few fellows who could play instruments, and they went along with the serenaders.

The Ely Josephs for several generations have gone around the town serenading the Josephs and then after gathering up the crowd, would congregate at the lodge hall for refreshments. But now they have eliminated the serenading and had the entire celebration at the hall.

Instigators of the celebration called out the local Odd Fellows band to liven up the occasion and play familiar Czech tunes during the evening.

Joseph Holets, local banker, said he helped to commemorate the patron saint for over 50 years. He played the drum in the band. He remembers when "the boys used to come to the farm to get his father, the late Joseph Holets, Sr., and how he tagged along as a small boy for the whole affair.

Because the Josephs had such a dim future before their 1948 celebration, with no "Little Joes" to carry on as they have been doing for so many generations, Holets offered a $25 war bond to the first little Joseph born in the Ely community.

Just one month from the day the offer was made, a son was born to Mr. and Mrs. Edwin Vavra of Ely, and he became the winner of the bond offer. He was named Joseph after his grandfather, Joseph Vavra, also of Ely. Little Joe Vavra accompanied his grandfather Saturday night and was initiated into the realms of the Josephs on their special day.

Eighteen Josephs attended the affair, twice as many as last year. Several Josephs made a special effort to attend so that the celebration of the saint's day in their honor would not die out in the local community. However, Ely's longtime resident, Joe Novotny, shoe cobbler, Joseph Becicka, Joe Havilicek and Joe Kremenak were unable to attend because of illness. Kremenak remembers that the celebrating at Ely used to start at his home, because there were three Joes in his family, and he has been instrumental in keeping up the precedent.

The entertainment included card playing, visiting with old friends, topped off by dancing and refreshments. For the last three generations the women never attended the celebrating, but this year each Joseph asked his "Mrs." to come along.

Other Odd Fellow friends in the community also took part in the affair and helped the Josephs celebrate.
Below is a 1953 photo of "Joes" sent by Ed Vavra,
again showing "Little Joe" sitting on his grandfather's lap. 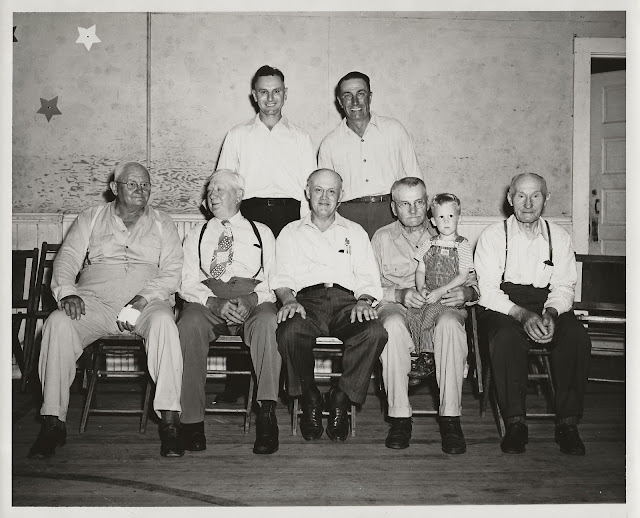 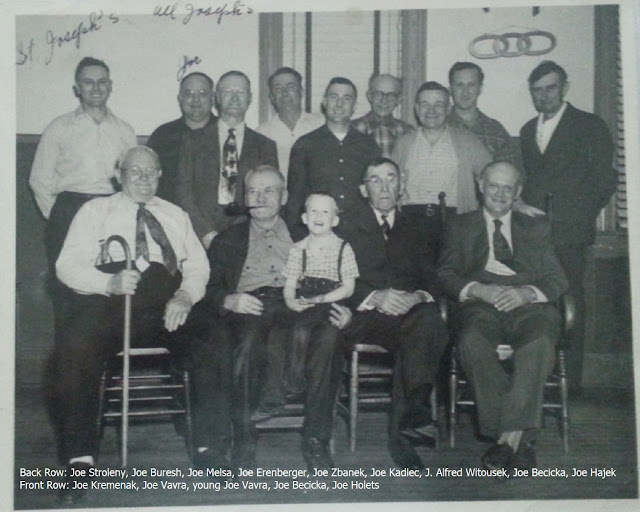 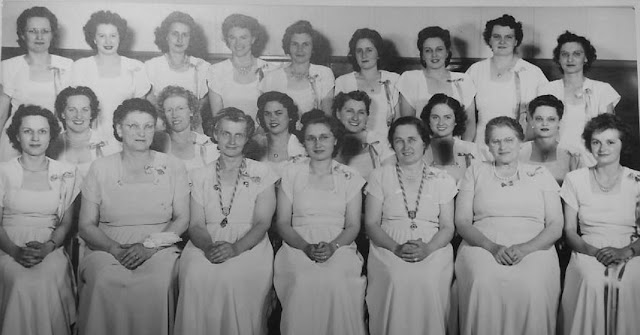 Above is a photo, perhaps from the 1950s, of a group of women belonging to the Ely Rebekahs Lodge. We need help identifying them! Click the photo to enlarge it!


Thanks to Facebook followers of our page, and the "card players" at Ely Community Center for help!
Posted by ECHS at 1:06 PM 3 comments: