From a newspaper clipping
Memories: Elizabeth (Hall) Graham, who came to the Shueyville area in 1855 and lived near Shueyville for 91 years. The newspaper is not identified, but the author is listed as Louise Johnston. The year it was written is estimated about 1946.

"In 1855 my father and mother, Mr. and Mrs. Thomas Hall, brought their four children from Staunton, VA. We came by boat down the Ohio River from Buchanan, by rail to Wheeling and then by covered wagon. At Nauvoo, IL we had to wait while they chopped away the ice so that we could be ferried across [the Mississippi River]. "

The Hall family first drove to Iowa City. "It was so exciting, because there was a big fire in the woods on the way here. We couldn't go through the burning timber, so we had to come around through Solon. Those hot flames made it seem like summer. Even though it was January we rode along in the wagon without wraps."

When the Halls arrived, only a few families were banded together in what is now Shueyville. "Christian Baylor and his family were here; Mr. Lloyd came before we did and C.C. Williams came the next year."

The Halls moved into a log cabin owned by William Shuey. Half of the cabin was occupied by the Shueys and the other half by the Halls. William was the son of Jacob Shuey, from whence cometh the village's name. [He and his family were also from Staunton, VA.]

Staunton, VA practically transported its population to Shueyville. The fall after Mrs. Graham's family embarked came an influx of Stauntonites. The Bowersox family, Hodge and Graham families all came in a group by covered wagon.

Thomas Hall, Mrs. Graham's father, was a carpenter by trade ... He soon bought a farm and built on the land a frame house .. the wood was hauled from Iowa City.

"George Anderson's job was as a land breaker. People hired him to use his ox-drawn equipment to prepare the land for farming. Then they hedged the land in with rail fences, usually of the stake and rider variety."

"Mr. Anderson brought his family from Virginia so that his sons would not have to serve in the Southern army. They were Northern sympathizers and at odds with the Rebels. However, the Confederates did get Will."

Cedar Rapids in 1855 was a decided contrast from the bustling community it is today. "It was a barren old place. On the west side there was hardly a thing. There was no bridge, and if you wanted to get across the river for any reason, you had to be ferried across.

"Nobody went to Cedar Rapids to shop. We always went to Iowa City for groceries."

Later William Shuey and a man named Goodhue started a general store in Shueyville. Clay Bowersox had the store for 40 years or so. At one time, so Mrs. Graham remembers, Shueyville boasted two brickyards and a feed mill. The sorghum mill, still operating, was run by James E. Bowersox for many years.

"Mail began coming through Shueyville by lightweight wagon that hauled freight, too. It came from Iowa City every other day.

Before the Civil war, the community began building a brick church. Construction was halted by the war and during the fray services were held in the basement. After the war, construction was resumed. 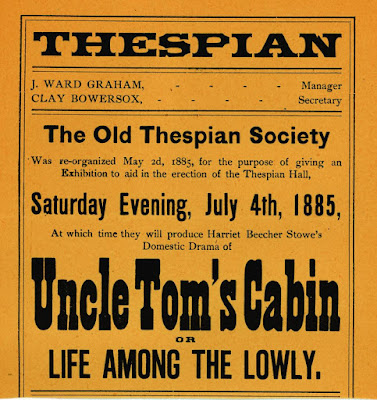 "Our church was financed in rather a strange way. J. K. Barnd, an amateur actor, started a dramatic society. The society staged plays and the profits went to the building fund.

Mrs. Graham and her husband, Ward Graham, were both active in the society as were the Bowersox and many others. Mrs. Graham Starred as Eliza in "Uncle Tom's Cabin" when it was in its heyday. The part of her son was taken by her sister, Mrs. Shoemaker.

A makeshift stage was rigged up in the church basement for the plays Mr. Barnd directed. The enthusiastic amateurs played to big audiences with people from miles around coming to see the entertainment.

"One Fourth of July we gave 'Uncle Tom's Cabin' on a flatboat. It was on the Iowa River about 6 miles from here. The audience sat on the bank near what was later Barnd's sawmill."