Ely Then and Now 2

Across from the Post Office on the north side of Dows Street you will notice a row of wood frame commercial buildings with boom town fronts and cornices supported by brackets, so typical of late Victorian commercial architecture in the Midwest. Although they are plain and modestly sized, as was the Bohemian, or Czech way, it is unusual for so many of these buildings to have survived into the 21st century.

The largest building on the corner was built jointly by J.C. Dvorak and the Independent Order of Oddfellows, Lodge #581, in 1901. Dvorak's business downstairs was a hardware store and farm implement dealership. The Oddfellows met upstairs. They were an organizing force in Ely with their ethical precepts, community events, sports teams, and volunteer activities aiding folks who had fallen upon hard times.

Next door to the west was another general store also built in 1901 which remained in business until 1967. 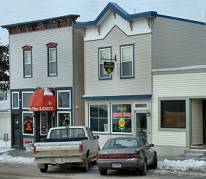 Adjoining that is a small building with a peaked facade (2nd from left in the photo) which was recently rebuilt in the exact configuration of the old Telephone Office previously on the site.

And finally, on the alley is a 1901 building, originally a livery stable and then a butcher shop. (far left in the above photo).

SOUTH SIDE OF DOWS STREET

The easternmost section of the tavern was originally Hanus and Sons Cabinet Shop which included casket making and undertaker services, active from 1895 to 1919.

Across the alley to the west of the tavern is a residence with a boom town front which was once Roztocil's General Store. It has a residential addition, often a feature of mixed use in small town commercial districts.

On the north side of Dows Street on the block between Walker Street and State Street are two imposing houses built in the late 1910's in the Colonial Revival style by Martin Vanorny, rural mail carrier (1505 Dows Street), and his uncle Charles Vanorny, a retired farmer (1585 Dows Street). Such showplace residences were often built on main traffic corridors.

All told, there are eleven Dows Street buildings on the two block stretch between State Street and Main Street designated in the National Register of Historic Places as the Dows Street Historic District. They do not tell the whole story of our history; an even greater variety of businesses existed, not least of which was a substantial depot; but the buildings no longer stand. Also missing from this brief account are the names, family relationships, churches and other community organizations that contributed to the growth of the area.