2022 is the year the town of Ely celebrates its 150th year. To help celebrate this sesquicentennial year, we will be posting a number of historical articles so that the people of Ely can learn more about the town's beginnings. The first of these is a transcription from a full page article about Ely from the year of 1923.

ELY … ITS COMMUNITY ONE OF THE OLDEST IN THE COUNTY 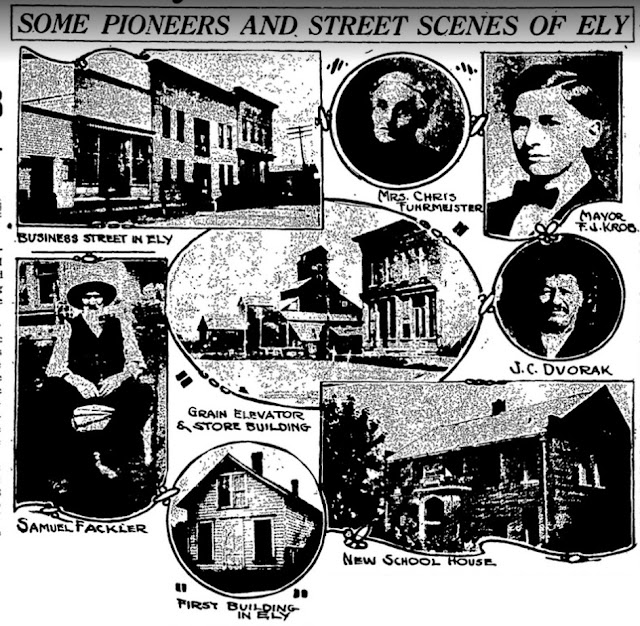 Ten years ago or more, Ely attracted not a little attention as the town with the barefooted mayor. That man is J.C. Dvorak, one of Ely's prominent citizens, one of the younger "pioneers," who has been instrumental in the town's affairs, who is known as on of the best of good-fellows and who, I found, is well versed in the history of the town, in which he has lived for thirty-four years.

The writer found Mr. Dvorak barefooted at his store, one of the largest in town.

He has gone barefooted in the summer-time for years, except of course on special occasions, when he does work that requires shoes or when he goes to Cedar Rapids, Iowa City or some other place away from home.

Comfort is given by Mr. Dvorak as his reason, for not wearing shoes more of the time,. He can not be comfortable in heavy shoes and socks, so he leaves them off keeping a pair of loose slippers at the store and house when he wants footwear to protect his feet.

Mr. Dvorak was born in Bohemia sixty-three years ago, and came to this country in 1855 with his parents, Mr. and Mrs. Albert Dvorak, who live at 727 F avenue west, Cedar Rapids, where they moved from their farm near here twenty-four years ago.

When Mr. Dvorak came to Ely there were only a few store buildings and dwellings here. He entered the hardware and implement business and soon built up a large trade. Twenty-one years ago he built the two story building, occupied by his store, with lodge rooms on the second floor, and about the same time put up his residence.

He was instrumental in getting the town incorporated, was mayor of Ely from 1910 to 1916 and during his administration gave much of his time to building up the town, putting in cement sidewalks and grading the streets.

Mr. Dvorak is one of the prominent Odd Fellows in Linn county. He was one of the organizers and the first noble grand of Ely lodge No. 582 which was formed June 1, 1893, and in the succeeding years has held every office in the lodge and was its financial secretary for fifteen years. He has twice been a member of the grand lodge of the order. Mr. Dvorak is also an active member of the Z. C. B. J. lodge.

Mr. Dvorak has probably lived in Ely continuously as long as any other and so is well versed in the history of the town. He recalls when the town site was all timber and brush, when there was little thought of the town until the railroad came through and the grounds was purchased by the company from Andrew Fuhrmeister, father of Luther Fuhrmeister of Cedar Rapids. John Holler, reported to have been the first owner of the land on which the town is built, sold to Alex Gilmore who transferred to William Harms, A Quaker, from who it was purchased in 1867 by Mr. Fuhrmeister.

But long before the town was laid out, William Cooper built the first building on the site, a little structure placed in a clearing of the scrubby timber, and in which he opened a general store. The store changed hands, but the building is still standing it is said, having been altered and improved somewhat to be used as a residence.

Ely was platted in June 1872, the survey being made by T.M. Johnson, under the direction of John F. Ely. Ely, one of the pioneers of Linn county, a prominent railroad builder in the early days and one of the officers and stockholders of the B. C. R. and N. [Burlington, Cedar Rapids and Northern Railroad] The town was named for him.

After the railroad, buildings were erected more rapidly and the place soon took on the aspects of an active town. The railroad station, a warehouse by Andrew Fuhrmeister, a store building by Jerry Smith, then a saloon, a drug store and hardware store were built in the order named, dwellings going up as the business houses were built and folk moved to town.

Mr. Dvorak remembers many of the first business men of Ely. James Moorhead now of Marion, was the first druggist; Wesley Svacha, the first harness maker; Anton Horak, the first blacksmth; Dr. E. H. Brumbaugh, the first physician; John Hanus was the first cabinet maker and Joseph Jonas, who is still living, was the fist shoe maker to ply his trade in the town.

There were four saloons in the town at one time, it is said.

WESTERN
"School was first held as a primary department of the College, at which there was an attendance of twenty during the first year.  A district school was then organized and held in a small dwelling now standing vacant in the western part of town.  School was held there until 1861, when the present two-story brick building, about 24x40 feet in size, was constructed west of the business part of town.  There are two rooms, now taught by Stephen I. Harrison and Miss Sadie Bowman." p. 581.

ELY
"The first school house in this vicinity was erected in 1850.  It was a little cabin, made of lynn poles, and school was first taught there by Israel Clark.  Another, one-quarter of a mile east of town, afterward known as the Ely school house, was built in the fall of 1854, and first taught by R. Rowe.  This was moved nearer to the town plat when the latter was laid off.  A new frame school house of one room was built in Ely in the fall of 1876, where school was first taught by Isaac Heller, who was afterward drowned in the Cedar River.  Al Weaver taught the next winter." p.585.

"But Mr. Lingle reports the first school house as built on section 9, by Chauncy Fowler, in 1848 or '44. He says it was about fourteen feet square-built of round logs; but there was one log left out, and the hole was covered with greased paper for a window. There was no floor; and a big fireplace at one end, with huge back-log and forestick, and then plenty of small wood, served to keep it warm in the coldest days.

SCHOOLS NEAR ELY AND SHUEYVILLE IN JOHNSON COUNTY

Thank you to Michael Clark for calling to tell us we had a mistake in one of our links! It has now been fixed. Micheal descends from the early Clark family in Putnam township.

The error was the link to "People in Putnam Township" in the following .... 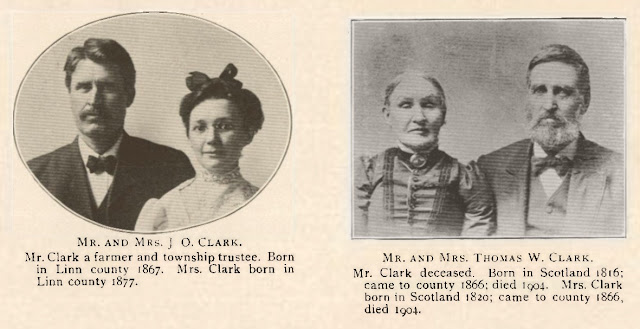 Early Clark family photos from the 1907 Linn County Atlas (click the photo to enlarge it)
Posted by ECHS at 2:07 PM No comments:

Mark Krob submitted these two mid-1930s sports photos.
They are from the collection of Bob Krob. 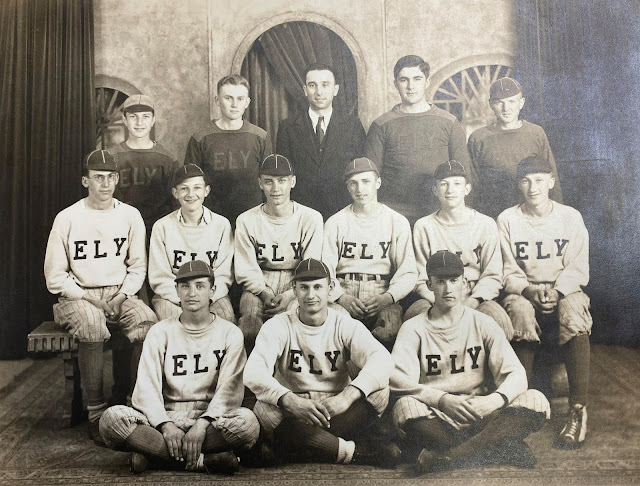 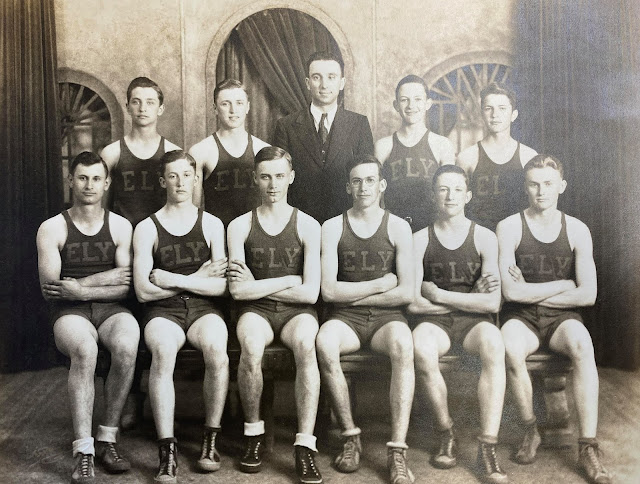 Bud Goodrow posted this photo on Facebook of an Esther Zvacek piano and accordion recital held at the Ely Legion about 1960. Thanks, Bud!

If you wish to identify any of these people please comment below. 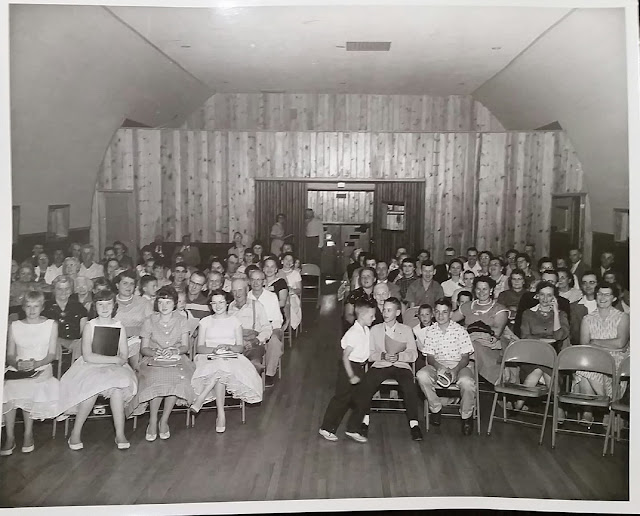 Cedar Rapids Gazette, November 6, 1991.
(Excerpts)
Esther Zvacek, 86, of 2800 Wright Brothers Blvd. E., died Monday in St. Luke's Hospital following a short illness. Esther was born Oct. 13, 1905, in her home at 2800 Wright Brothers Blvd. E. and had resided there all her life. She taught piano, organ, accordion, and guitar for over 60 years in the Ely area. She was a lifelong member of First Presbyterian Church near Ely, and a member of Johanna Society, American Legion Auxiliary and was Past Noble Grand of Ely Rebekah Lodge 56.

Many of you know "Barefoot Becky". She was a student of Esther's. From her web site at https://barefootbecky.com/about/

In 1980, when she (Becky) was ten years old, Becky took her first accordion lesson from Esther Zvacek. Esther was an elderly lady who still only charged a dollar for a lesson! Becky was very close to her teacher. Both Becky and her mother would go over to Esther’s house every Friday night for supper before having their lessons. Her mom even kept a garden there for Esther and Becky mowed her lawn.