Click the photo to enlarge it.
Above is a photo of the C.S.P.S. Lodge Hall that used to stand on the east side of Walker Street between Dows Street and Traer Street in Ely.  Č.S.P.S. stands for "Česko-Slovenský Podporující Spolek" (Czech-Slovak Protective Society).  Many dances & events were held in this hall in the past.

Below are memories of the CSPS Hall written by John Prastka.  Prastka (also Praska) was born in 1885 in Oxford Junction but grew up in Ely.  Preceding the Ely Centennial in 1972 he hand-wrote his memories of early Ely, which is now part of the collections at the Ely Community History Society archive.

The CSPS Hall had a wooded lot nearby with benches under the trees and that was quite close to the center of town.  Diagonally to the northwest was just about as much open space under trees that would have been nice for a band stand but Ely as yet had no band.

At the CSPS Hall the main picnic was July 4th and usually the New Year’s Eve dance, which lasted all night, where as July 4th it started at noon and dancing kept up till daylight the 5th.  Close to the hall some booths were set up like a roulette wheel with numbers on it and after so many paddles were sold each having 3 numbers on the paddle, then this wheel was given a spin and with a strip of leather passing over wood pegs it stopped at a certain number and if you held that number, after holding your breath, you got a choice of some gadget from the stand.  Of course, like all wheels of chance, they were rigged to enrich the operators.

There was usually on the grounds some man from Cedar Rapids who had a cane rack, and sold you so many rings for lets say a dime or 15 cents and you could try your luck to throw the ring to lasso a cane.  Colored rubber balloons were sold at the same stand.  Someone sold hot peanuts and popcorn.

At the hall at about midnight the kitchen had kettles like a wash boiler into which were placed bologna and wieners, and there was rye bread cut up to go with it, and that was the real stuff, none made so good today.  The stand in the hall sold lemonade with cut up lemons floating in tubs and sugared up, and one could buy it if he preferred it instead of beer.  The girls usually asked for it and you could buy oranges, also paper sacks of hard sugar candy.  But beer was sold mostly, and the floor had to be swept by a broad push brush occasionally as it got dusty from the mud on the men's shoes.

Every so often glasses of beer were carried across the whole length of the dance floor to water up the thirsty band musicians, who got dry quite often.  Heavy candles were set in holders so each musician could read the sheet music, and when these candles burned low to short stubs, it was a sign that it was close to daylight, especially July 4th.  Not so on New Year’s Eve.

Not all the farmer boys danced even though they brought their guests or maybe even sweethearts but they stood 1/3 way from the bar just looking at the dancers.  Often when their sweethearts were nestling too close on some gay town blade, they got jealous and could start a fight.  Hardly a dance took place without some fights.

Only a few of us are alive who could describe these dances, plays of home talent, medicine shows that were held there at times, and maybe it is just as well that I took over this job.

Besides the dances that were held at this old dance and lodge meeting place. there were the home talent plays given say 3 or 4 during the cold quiet winter season.  Small groups of Bohemian players were invited by the lodge members who loaned them the hall and these came to replay what was shown in the large CSPS Hall on 3rd Street SE in Cedar Rapids.  These were the days before radios, television sets in color, the phonograph and you had only traveling minstrels, Chautauqua plays, church plays and programs and revival church meetings that stirred the people up when they got in some rut and did not attend church steady enough and would fall back.

The Ely people were hungry for some sort of recreation and so the CSPS Hall was used to give plays with a very small charge for admittance to pay for light, heat and the books that had to be bought or rented from which plays were written first in long hand for each player to memorize for the final night and there was usually only one rehearsal, which was not hardly enough as many actors didn’t know their parts making it hard for those who did.  Some were clever enough to supply their own words and one never did know his right words.  There was old Frank Sladek (the tiling man) and he loved to ad lib.  Each play had a concealed person who spoke the words softly so they could get their bearings from chapter to chapter.  There usually was a leading man, also a leading woman who had the heavier parts in a drama being a comic one or a serious one.  My sister had some leading parts and got used to the stage and did not panic or get stage-fright.  She usually had the tedious job of writing parts for the other actors and actresses, and many were the long nights by a poor kerosene lamp was this job done.

Cedar Rapids had some quite talented Bohemian players and many from Ely went to the Cedar Rapids CSPS Hall to see plays, often in the dead of winter in dark evenings.  Mr. Joe Denk would take out the gasoline powered section car and hitch – it is the dumpy over which planks were laid to seat a half dozen women and men and a 9 mile trip to Cedar Rapids was undertaken with chances of getting hit by some train, but worse for they sat in a heated room (for the play) and then got numb and cold going home so it was dangerous to hold on.  They were that hung up for to see a play. 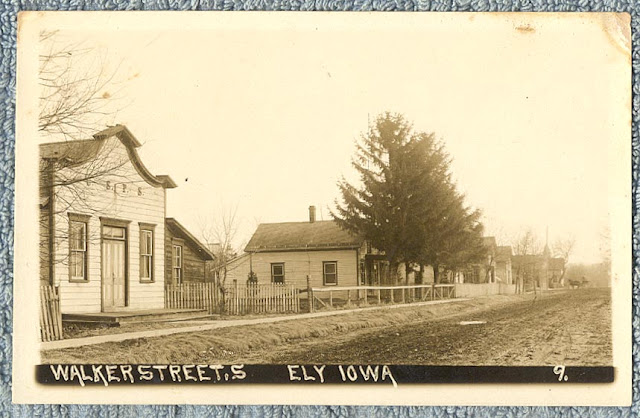 Looking down Walker Street toward Dows Street, C.S.P.S. building on the left. 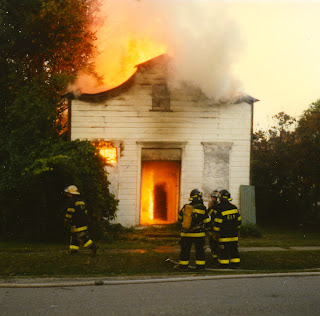 The Ely Fire Department burned the CSPS Hall,
which was in great disrepair, as a practice fire in 1996.

Also see a newer post showing a line-drawing of the CSPS Hall in Ely.