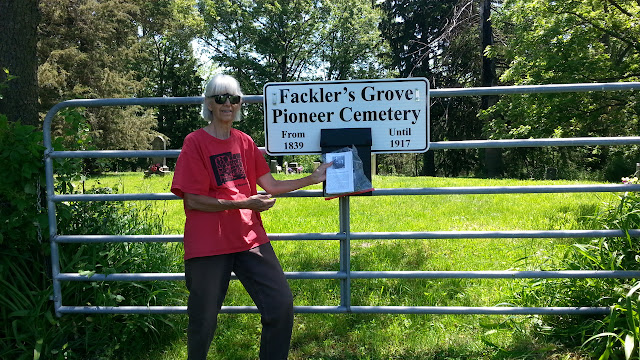 On June 1, 2017 we installed a gate sign at Fackler's Grove Cemetery.  In the middle of the sign is a box holding pamphlets filled with information about the graves and the people who are buried there.

We had hoped to have the sign and pamphlet box installed by Memorial Day, but were not able to make it happen.  It was lovely to see that people had been there and left several floral tributes at various graves.

As stated elsewhere in this blog, the cemetery is located in the middle of private land, down a long lane. We thank Dennis Erenberger for allowing access to the cemetery.  Visitors should telephone 319-270-3836 to ask for permission to visit the cemetery.

We thank the Big Grove Township Trustees for their cooperation in this project and for making room in their budget for mowing the lane to the cemetery and the grounds.

Special thanks to our volunteers and our paid worker.

We thank the State Association for the Preservation of Iowa Cemeteries (SAPIC) for their grant money.  Also thank you to Ely's Town and Country Club for their generous donation, and to descendants of families buried in the cemetery who contributed funds.

We started renovation of the cemetery in the summer of 2013.  It has been a long process and we are pleased to report that it is winding down.  We still have some some gravestones to clean, but the major work is finished.

Clary and Barb are physically unable to re-erect the largest headstones (the main Fackler headstone, the Startzer headstone, and the Henry H. Vornholt headstone).  It would involve large equipment and is beyond our means.  Hopefully this can happen in the future.