We found and scanned the below article from a 1955-56 local newspaper.  It shows the 4-H boys examining the old school bell that was once in Prairie Ridge School bell tower. 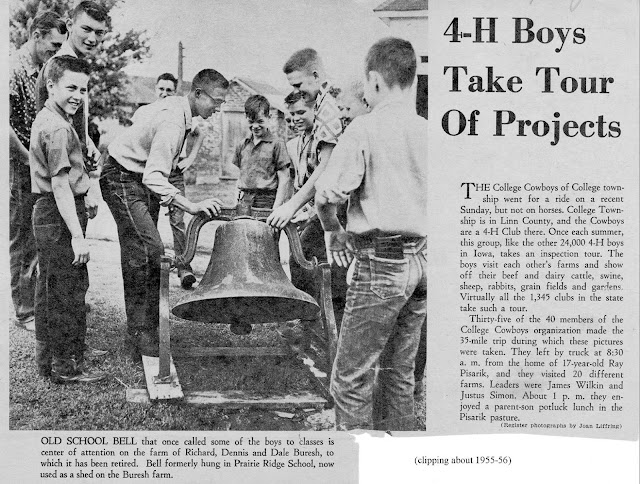 With the help of some local men that were in the 4-H group we were able to identify some of the boys. From the left:  Marvin Trachta-short boy, Ray Pisarik above Marvin’s head, Richard Buresh or Bob Zahradnik in print shirt far left, Gerald Zahradnik-head above boy by bell,  Kenneth Bonnty in front touching the bell, George Hasley next to his brother Andy Hasley, Lynn Glass (possibly), Unknowns, two heads partially hidden, Truman Wilken (or possibly George Chadima) with back to camera.

Recently, someone posted a small version of the below 1910 photo on Facebook showing the old Prairie Ridge School that used to sit north of Wright Brothers Blvd. on Spanish Road.  Click on all photos to enlarge them.


A comment below the photo read ....
My grandparents owned the land it was on and once the school was no longer used it was moved to my parents (Edwin and Martha Buresh) farm just 1/4 mile farther north and was used as our garage and my father's shop for many, many years! We still have the building.  Unfortunately the building is not in good shape any longer.   My father, and aunts, and an uncle attended school there, and my brother built his first home on the original site.

Here is a closer look at the children in the above photo: 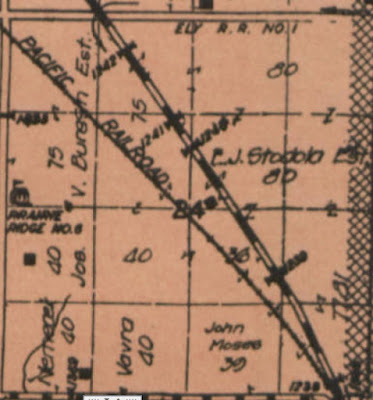 This is what the school house looked like a few years ago, from Glenn Chatfield's blog, Iowa One Room Schools. 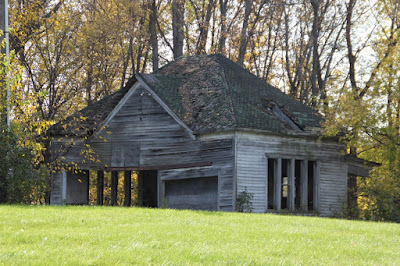 Also check out more photos taken in 2016 of the old school from 42N Observations,
https://42n.blogspot.com/2016/07/now-and-then-prairie-ridge-school-near.html

Email ThisBlogThis!Share to TwitterShare to FacebookShare to Pinterest
Labels: Schools

Do you know when the school was built and when it closed?

Do you know the township # of the school?