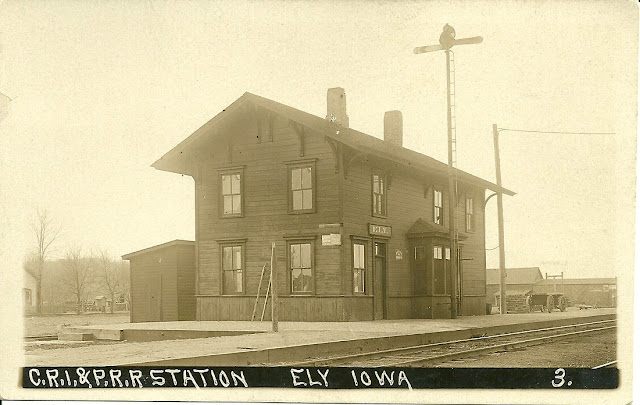 Below are photos of the Ely train depot that once existed off Dows Street.

Also below are some memories of the train depot by Ely resident John Prastka. Prastka was born in 1885 in Oxford Junction but grew up in Ely.  Before the Ely Centennial in 1972 he hand-wrote his memories of early Ely.  He gave his writing to the Ely Legion, and they are now part of  the Ely Community History Society collections. Prastka died June 1, 1975 at the age of 89. 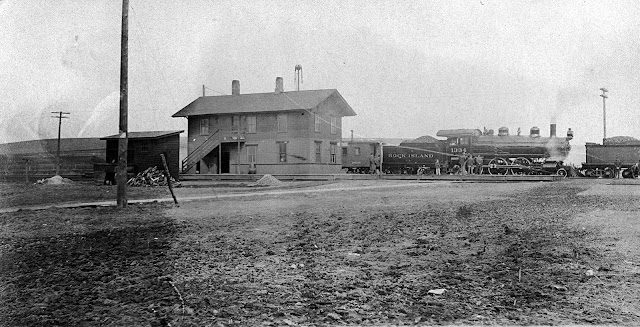 John Prastka writes ...
There was the depot.  The agent lived on the second story with his family, and it was of a color like clay and into the paint fine sand was blown so the sparks from the engines would not set it afire.  It had a big pot bellied cast iron soft coal stove in the comfy waiting room from which you could purchase your ticket through a window waist high.

In the telegraph room was a smaller cast iron stove, and the doors had to be kept open to help knock down the draft and I had seen them red hot in winter at times.  The room often was full of acrid gassy smoke that could make you cough gasping for fresh air.  There were built in benches to the south and west.  The entrance door faced the tracks to the east.  On the ends of this depot were white letters “ELY”.  A long ladder stood next to the north end and held in place by tilting the ladder and pushing it up straight.  The entrance to the second floor was by the outside steps.  The freight room with a pair of scales was to the north and a door at both south and east.  We kids often weighed ourselves there on the scales and looking somewhat wishfully at the candy buckets and boxes, also the sacks of peanuts.  The smell was quite pleasant there.

The plank platform was on blocks of timber to make it easier for people to board the passenger cars and this platform was all around the depot and extended 40 or 50 feet each way from the front part of the depot where the windows were built out so the telegrapher could see both down the tracks and also up.

A double latrine of same color was set up a little to the west of the depot, men to the west and ladies to the east with the lettering over the doors.

At this time no homes were as yet built east of the tracks, which consisted of the main line. A two switch tracks, and there was also a switch track to the west of the depot.  Just a few rods north from the depot was a wooden water tank where the engines refilled the water tanks of the engine.  The coal was in the center easy to get at by the fireman with his big scoop.

I forgot to write that down near the creamery [Note: where the fire station is now located] was the section house where the hand car and the dumpy [?] were housed and under lock and key, and a short way across the tracks was a tall windmill that pumped the water for the water tank.  The land sloped towards Willow Creek and they need not go so deep to strike water there as it was maybe 8 feet lower than the tracks.  Many were the times us kids climbed to this platform to take a look around and our folks would have worried about us for fear we’d fall, and it is really dangerous to get up on these small platforms as gusts of winds could topple you off.  We were sure-footed however.

For us kids the depot was a sort of hangout, just to see the trains and passenger ones also, come and go.  We noted the styles of cars, caboose and engine types, some had only 4 drive wheels and later came these with 6 and on and on to bigger models, as time passed.

At this time I must write that those engineers who laid out the roadway Ely to Cedar Rapids had committed a grave error and had chosen a bad route north of Ely and had a big incline and a S curve also and many a freight got stuck there.  We kids often would jump off easy there, and of course had to walk back and if barefooted we had to use the dusty road.
Posted by ECHS at 8:28 AM