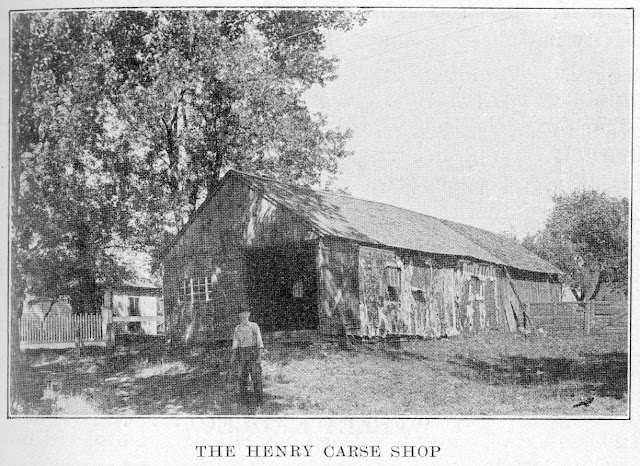 "The honest blacksmith" is not a term which is lightly applied to Henry Carse, who for fifty-eight years has toiled at his shop in Shueyville, Iowa. He served his apprenticeship in Geneseo, Illinois, then came to Shueyville. Mr. Carse's dominant traits of character, as vouched for by his neighbors of over half a century, are truth, honesty, temperance, and industry. His reputation, confirmed in the final court of appeal, public opinion, entitles him to a high place in the citizenship of Johnson county.

Mr. Carse is complete Irish and complete American — Irish by blood and ancestry, American by birth and residence. He was born in Wayne county, Ohio, October 25, 1832; therefore, at this writing, he has just entered upon his eightieth year.

His parents were William Carse and Mary Ann Pinley, both natives of county Down, Ireland. Both were single when they came to America. William Carse, at the age of eighteen, left his native land and settled in Wayne county, Ohio. There he met and married Mary Ann Finley, who had come to America with her parents and settled in the same county. William Carse was a farmer, and followed that calling all his life. After a number of years spent in Ohio, he and his good wife removed to Henry county, Illinois, where they both died, after having lived for a goodly time on their farm. They were blessed with eleven children. We are able to present the names of but nine: Jane, now Mrs. William Dersham, living in Whiteside county, Illinois ; our subject; Adam, died in 1905 ; Margaret, now Mrs. William Merriman, living in Geneseo, Henry county, Illinois ; Nancy, deceased ; John, living on the old homestead in Illinois; Sarah Ann, who was twin to John, residing with the latter on the old homestead; Thomas B., living in Cleveland, Illinois ; Mary, who is also living on the old homestead with her brother and sister Sarah Ann.

Henry Carse learned the blacksmith trade when he was about twenty years of age. At that time he launched out to make his own way in the world. He has never failed to "weld good" in the battle of life. A blacksmith he was at twenty; a blacksmith he is at eighty. He learned the trade in Geneseo, Illinois. There he served his apprenticeship of three years and worked as a journeyman one year. Soon after that he moved to Shueyville, Iowa, taking with him his wife, Miss Mary Ann Brown, whom he married in Henry county, Illinois, on the 5th of May, 1861. During his half century of residence and activity in Johnson county, Mr. Carse has had business dealings with many hundreds of people. Every customer and acquaintance has regarded him with honor and respect.

Mr. Carse is a democrat. Mrs. Carse is a member of the United Evangelical church. Needless to say that this venerable couple are held in high esteem by their neighbors and friends of Shueyville. 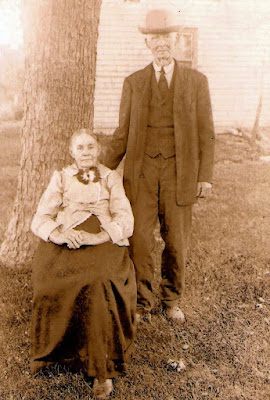 Henry Carse, a pioneer resident of Jefferson township passed away at his home at Shueyville on Friday last November 1, 1918.  A man well known in the community and beyond and widely respected as neighbor and citizen.  The funeral was held from the United Brethren Church and conducted on Sunday afternoon, November 3, 1918.  Rev. George Bennett of Iowa City, an old time friend of the family presided.  The hour was two o'clock and a large company gathered to pay a last tribute to the memory of an excellent man.


In addition to Mrs. Carse, the widow, and her two daughters, the following immediate relatives and friends of the family were present:  Thomas Carse of Cleveland, Ill., Miss Mary Carse and Miles Carse of Geneseo, Ill., Mrs. McCarthy of Emmetsburg, Mr. and Mrs. Wethro of Geneseo and Mrs. Sherman and Mrs. Carr of Cedar Rapids, Iowa.

The preacher based his remarks on the words from Holy Writ.  "Until the day break and the shadows flee away" and in connection therewith spoke of the man who had passed and gone from their midst.  He had prepared a brief sketch of Mr. Carse and this was presented to the audience as follows:

Henry Carse was born on a farm at West Salem, Wayne County, Ohio, on Oct. 25, 1832, this making him 86 years and a few days old at the time of his death. When a lad he moved with his parents to Geneseo, Ill.  Later he became an apprentice as a blacksmith and came to Shueyville and worked at his trade as a young man and hoofing it there, it is said, on foot.

Returning to Geneseo, he was married to Miss Mary Ann Brown of Madison Co., Ill. on May 5, 1861 and in the fall of 1865 moved to Shueyville where he and his good wife have lived ever since.

Mr. Carse was of sturdy, wiry build and had enjoyed generally rugged health down through the course of his long life.  He was fond of work and loved his trade.  He had no sympathy with loafers or slackers.  Though naturally during later years his strength had declined, he was finally well up through the middle of August.  On the 15th day of that month, however, he went into his garden to mow some weeds, which proved too much for him.  He sprained his wrist (Note:  Henry Carse told that his father cut his arm on barbed wire and infection kept the wound from healing) and this apparently simple hurt so affected his general health as he never quite rallied from it.  As the weeks passed he became weaker, and taking to his bed, gradually and steadily the flame of life grew less in volume till on Friday morning last it ceased to burn and the wheels of existence were still.  Part from weakness these last weeks of life seemed free of intense pain.  At any rate, if he felt it, he did not show it and was very docile, and an uncomplaining patient--very good to take care of, and very responsive to the loving ministration of a devoted wife and two dutiful daughters who had all three been his constant attendants for eight weeks previous to his decease.

A marked feature of his illness was the possession of clear mental faculties to the last, and an ever present cheerfulness that was closely associated with this.  As a true patriot, he was live to the nature of the great struggle his country is making for Christian liberty in the world and only a week since inquiring what had been done in his name for the purchase of liberty bonds, was gratified when informed that his had been liberally attended to.

Seven years ago in June was celebrated the golden wedding of Mr. Carse and Mrs. and their son and two daughters were present to congratulate them on the suspicious event, the proceedings being on the lawn of the old home. It was a happy occasion and practically every family in the neighborhood was represented. An address was given to the assembled company by the minister of the United Brethren Church resident in the village at the time, congratulating the worthy pair on having reached this important milestone in their lives.

Henry Carse came to Shueyville soon after its settlement as village and thus may be regarded as a Johnson County pioneer and one who has known the county at a record period of its history.  He will sleep in the cemetery on the hill, where he properly belongs, his earthly testimony being written here in the community and the lives of its residents, testimony of industrious and worthy citizenship.

The town of Shueyville has an interesting history.  It was laid out in 1856 by James Shuey.  The Shuey's came from Virginia bringing with them colony of folk who settled in northern part of Johnson Co.  They came before the railroad had been built into Cedar Rapids, Iowa. 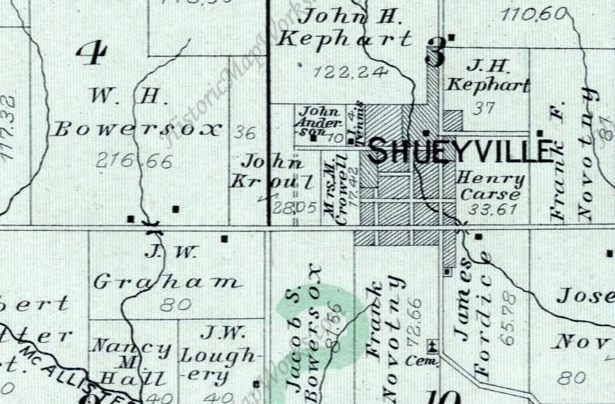