PUTNAM TOWNSHIP has six schools, two of which are well taught, one fair and the other three as poor as need be. They have three males and three female teachers each of whom received $25 per month and after they pay $12 per month for board they would each have $13 left as clear gain for twenty days of work.

There are two frame houses which have been once good ones but are dilapidated and much decayed. There are two log houses, one of which looks as if it had been built before the flood. Its history has almost passed out of memory of the oldest inhabitant. They are still using it; they talk of building a new one sometime. In this neighborhood they have built two very respectable churches which are an honor to the neighborhood. These have been built by a few willing hands and benevolent hearts, with less wealth among either of the church memberships than in the school district.

COLLEGE TOWNSHIP has also six school houses and six schools. They pay the same exorbitant wages. In this township there are three old log houses, one old frame and one good "unfinished" brick in Western. Two of the schools have been good ones, two fairly taught and two poor ones as any place need be afflicted with. These last two teachers were within sight of the smoke of the building in which we held our annual institute, that had been gotten up by the labor of weeks and for no other purpose than to improve our teachers and consequently our schools. One of these teachers represented to me that he was sick at the time of institute. I have evidence that he gathered corn all the week. I was at the other school and think it of no possible account. The people are losing both their school and money. I hope the time will soon come when school officials will learn wisdom and watch such cases and report them. We have nine log school houses in our county and five of them are in these two townships.

The Western school house will be a good one when finished. It is very evident that it has been neglected in consequence of the attention that has been paid to the College.

The people of these townships should see to it that these old houses are displaced by good ones. Good teachers look after good surroundings and good houses. These are a sure index to the feelings that sustain good schools. There is a great emigration of Bohemians to those two townships who are fast displacing the English by buying farms. There is some talk of establishing a school in College township where they can teach their own language.

WESTERN COLLEGE Western is a village situated in College township 8 miles south of Cedar Rapids and has perhaps 300 or 400 inhabitants. Eight years ago it was a broad, wild and unbroken prairie. Some of the leading men in the United Brethren church determined to locate a school house somewhere in Iowa. They advertised for donations promising that the locality which offered the mnost should have the school. A liberal man in the vicinity offered several hundred acres of land and they located a college upon it. The college grounds cover an area of near ten acres. The enclosure contains the college building and two large boarding halls. The college and one of the other buildings are finished. The other will be finished during the summer. The enclosure has a bordering of several rows of trees with rows planted in several directions from the college buildings. A part of the college grounds is occupied by a nursery. The college with its grounds show taste and culture. All that it wants is a good stream of water to make it like the old pioneer preachers description of the Good world, "a Kentucky of a place." The school has three professors with an average attendance of about 70 students. There have been only two graduates. This is probably owing to the heavy calls of men to enter the country's service. The denomination is intensely Union in its sympathies, and has furnished a large per cent of its students for the war. 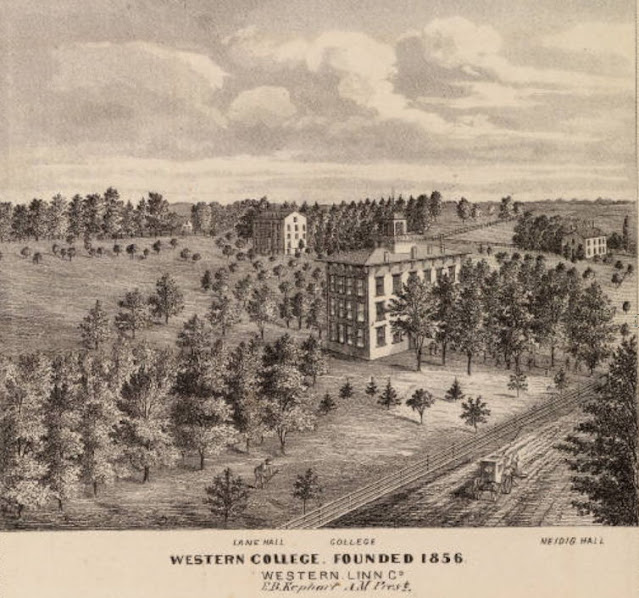