This is a transcription of the history of the Auxiliary to Ely's Post #555 American Legion, written [we believe] by Ann Fuhrmeister [possibly written in 1971 according to date on envelope].

Before and during WWI groups of women all over the U.S. organized by Red Cross met in homes, home-economics rooms in schools, etc., to sew and roll bandages, first to help England and France, then our own country. Then, after 1919 when the Legion was organized, these women who were already in service groups, became Auxiliaries to the Legion Posts.

In small towns and villages, one of the first objectives was a Legion and Auxiliary meeting place. As in other towns, Ely’s Post was organized in early 1921, named St. Quentin #555, and the women’s auxiliary charter was signed at Washington D.C. on August 1, 1922, countersigned at Davenport August 10, 1922.

The first president was Georgia Fuhrmeister. Early records show nearly every one served as President or as another officer at one time or another. Mrs. Stephen (Matilda) Stastny was a long time faithful secretary, often walking from her farm home to town for meetings - roads were still in the mud and rut stage.

When the Post bought a lot for a Legion building, the Auxiliary started making money by serving food at farm sales. Remember this was before R.E.C. and good roads and a later-acquired lunch wagon. A board laid over machinery, possibly in front of some shed or chicken house, was the counter - there was no heat for the workers and hamburgers were fried and coffee heated on an oil stove someone had brought from home. Many tales were told of the extreme hardships endured by the women serving these farm sales, and the tragedies, too, as when the pan of raw hamburger meat tumbled off some machinery into the debris below (chickens had roosted on the machinery!) These farm sales netted as little as $4.18 and $16.70 to $130.43 for a large sale. Quilting, rag rugs, bake sales, dances, suppers served, and ice cream socials were other sources of income.

After the lot for the Legion building was purchased on April 21, 1922, instead of building a new structure, two Ely wooden school buildings were available (since the district was putting up a new 2-story brick modern school) for $300. These were put together in such a way that the larger one was the hall - the smaller, placed with side to end of hall and raised several feet higher, was the stage, with the basement below serving as kitchen. Stoves in the hall, on the stage and in basement heated the hall - but water had to be carried from neighbors until the well was drilled near the outside door of the kitchen to save steps for the ladies! Also, 2 small structures were erected at the end of the lot near the alley - marked “M” and “W”. Lights were furnished by the local electric light plant. This set-up was a community center for plays - dances - programs - suppers - school affairs and commencements. In 1928, the hall was enlarged so that it was large enough for basketball, for which the school board rented the hall for many years.

From 1923 to 1930 the Auxiliary gave the Post a total of $791.23. All this money was laboriously made at farm sales, suppers, quilting, bake sales, dance refreshments, rag rugs, etc. The amounts were:

A new building was dedicated in 1955. Thus a new need for help from the Auxiliary. Annual fried chicken dinners and other dinners (as Prairie High School Athletic Banquets) and other projects - such as rummage sales, rag rug sales netted $22,374.83 given to Legion for paying the cost of the new Hall. [crossed off in pencil is “from Feb 1955 to July 1967.]

Besides helping the Legion pay for building expenses, the Auxiliary met all requirements as to assigned child [either a son or daughter of a Veteran], gifts to Veteran Hospitals, etc., and earned many citations through the years.

Below are photos of the Ely Legion Hall dedicated in 1955. 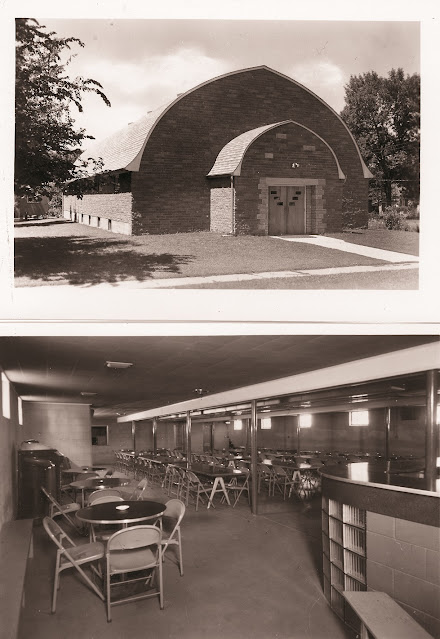 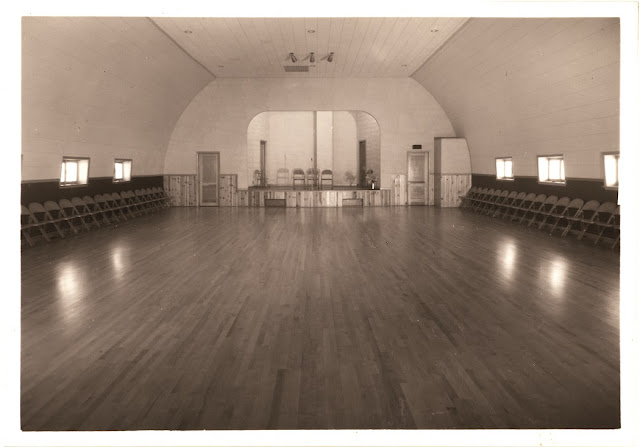