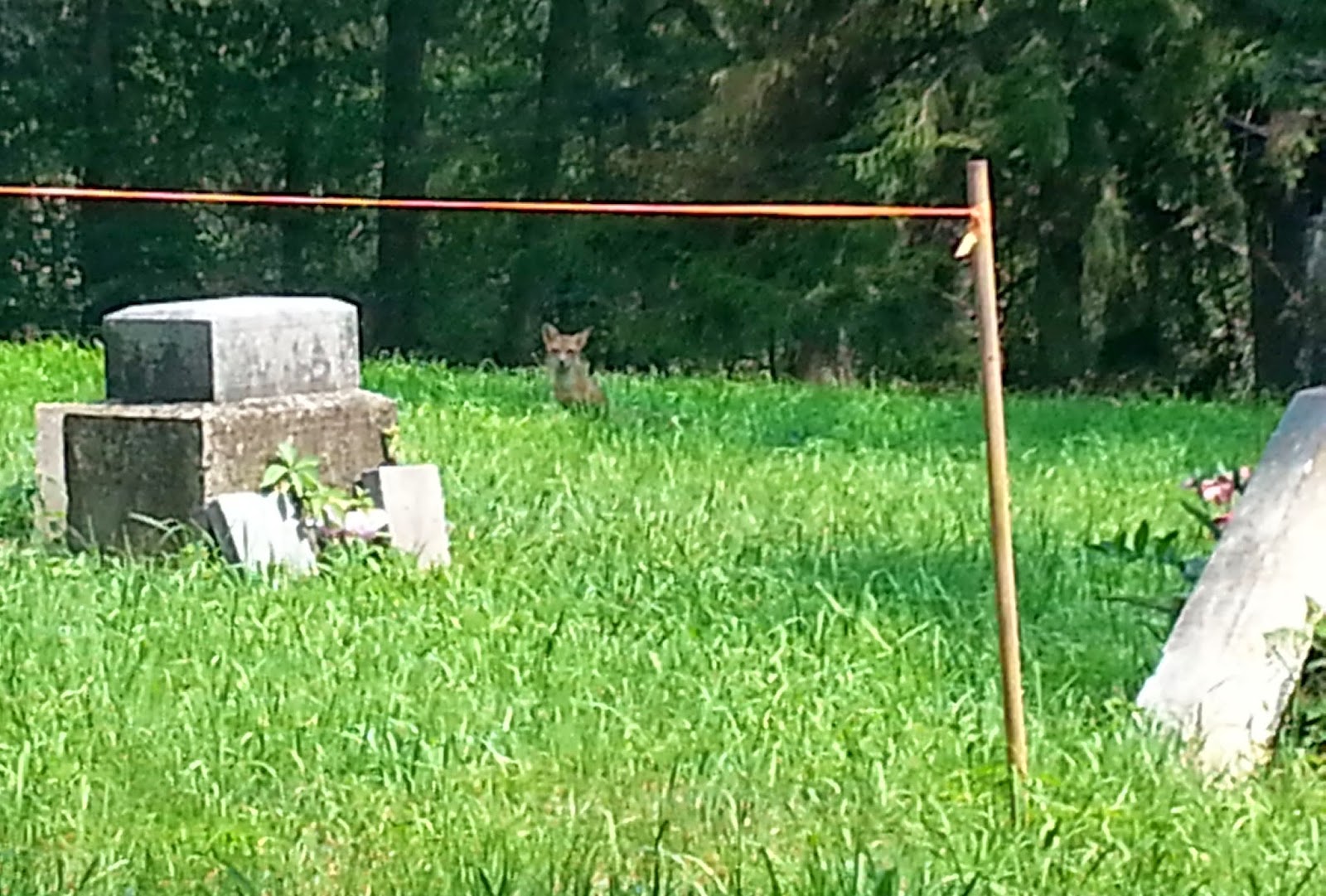 Three of us ECHS members went out to the cemetery this afternoon.  As discussed in older posts, many headstones were moved away from their original position some time ago.  Our intent today was to work on figuring out what headstones matched which empty bases that we had uncovered during previous work days.   We made some progress, but there is a long road ahead of us to restore what we can of the grave yard.

We have been finding some news about the cemetery in on-line old newspapers from Mount Vernon and Lisbon.  Here are a few things we have found.

1898-11-25 - Mount Vernon Hawk-Eye, page 8
Mr. Ferdinand Kershner of Marion was in the grove taking the measurements for a new fence at the cemetery.

1899-02-10 - Mount Vernon Hawk-Eye, page 8
On the 1st of Feb. occurred the death of Michael Fackler at the home of his brother Samuel.  Brights disease was the cause of his death.  The funeral was conducted by W. H. Fackler at the house at one o'clock on Friday.

Aunt Sallie Startzer was unable to get to the funeral of her brother Michael on account of a wreck on the railroad at Grand Junction, where she is staying, and no train went east in time for her to get here for the funeral.

(Obituary on the same page)
Michael Fackler, whose death is recorded in these columns, was born in Ohio, June 14th, 1828, and came with his parents to Louisa county, Iowa, in 1852 and shortly after came to Fackler's Grove where they took up a large tract of land and Michael has lived in or near the Grove ever since.  He never married therefore never enjoyed the pleasures or bore the burdens of marrying and rearing a family.  He lived alone most of the time until about three months ago when on account of failing health he came to live with his brother's family, who tenderly nursed and cared for him.  The greater part of the time he had to be helped from one part of the house to another, and altho he was a great sufferer he never complained and until a day or two before his death he had hopes of recovery.  He often showed by words and actions that he was grateful to them for what they did for him.  In spite of the exceeding cold a large crowd of friends assembled at the home of Samuel Fackler, Sr., to take the last look at all that remained of "uncle Mike," as he was familiarly known.
Mr. and Mrs. Samuel Fackler express their sincere thanks to the friends and neighbors who so kindly assisted them in the last sad duties to their brother.  (From the cemetery list:  Fackler, Michael; d 1 Feb 1899; 70 years 8 months)

1899-09-27 page 8 - Mount Vernon Hawk-Eye
The Varnholt boys set up a fine monument on the grave of their father in Fackler's Grove cemetery on Friday.