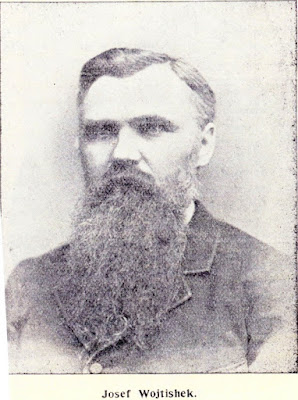 The Ely Community History Society has received a history on Josef Wojtishek (also seen as Vojtisek, or Woitisek) from Scott Phillips, a genealogical historian who has translated a large number of publications from the Czech language to English.

The Wojtishek history appeared in Amerikán Národní Kalendář, Volume: XXI, Year: 1898, Pages: 196-208, under the heading of “Memoirs of Czech Settlers in America"

The1898 history appears on the following links on Phillips' site "Onward to Our Past".

Read more about Joseph Wojtishek in an earlier blog post.
Here is the transcript of the 1898 article:
Josef Wojtishek from , Linn County, Iowa, was born in 1837 in Jimramov, Moravia on the Bohemian border where his parents worked as farmers. He attended local elementary school there. When he finished that school he helped his parents until 1853 when they sold everything they owned in order to leave for America. They hoped that their hard work would be better rewarded there. Another reason was to avoid military service for Josef and his brother. None of them wished to see them wearing the tight jacket of an Austrian soldier.
They went via Bremen to Galveston, Texas where they landed after 8 weeks of fortunate sailing. They continued on to Houston where they then stayed for 2 weeks. A Protestant preacher Bergman, from Cat Spring in Austin County, tried to convince them to move there, but they did not like the intensely hot weather of Texas, which they were not accustomed to. They were also afraid of the lack of good spring water, a really rare commodity in Texas.
Due to these reasons they decided to go back to Galveston and from there continued on to New Orleans. From that town they sailed via the Mississippi River north to St. Louis where they planned to settle. But they did not like that town too.  During this time there were some riots and therefore they decided to go to Chicago.”
“In Galena, Illinois the father of Wojtishek became very sick and on the third day after their arrival in Chicago he died. Everyone can understand the feelings of these poor immigrants staying by the coffin of the man who was their main support and breadwinner.  After they buried their father for his eternal rest, they continued on as orphans to Caledonia, Wisconsin, near Racine.
In this town there lived some other Czechs including some of their friends from the Old Country. They went there to buy some land and settle there. But the land in Caledonia was already too expensive and for newcomers it would have been very difficult to start there. Several families from Caledonia were going to move to Iowa at this time because land was cheap there and the people who had already settled there sent them good news. So the Wojtishek family decided to move there, too.
They bought a pair of oxen and together with another four families started the journey. After two weeks of traveling they reached Cedar Rapids. This was about eight miles from the place called Hoosler Grove (now Ely). At this place they occupied governmental land and started to farm. In the surrounding area were a lot of redskins in those times and also a lot of wolves. This made it difficult for the newcomers. Their first summer Josef, together with his younger brother, built a hut. Despite the fact that the hut was a primitive one they were proud of it and having one made it feel like a palace to them.
Three years later their mother remarried and in 1862 bought 40 acres in the same neighborhood and Josef remained alone on the first farm. His brother helped at both places and also worked for other farmers. In that time (1862) he married Miss Anna Riegel,[also Rigel] who came from an old Czech patriotic family.
They worked hard on the farm until 1872 and being successful, they found themselves able to buy more land. In the mentioned year he already owned 280 acres and an additional 80 acres, which they later sold. But his wife suffered from gout and could not be of much help to him. Therefore he began thinking about starting a new business. In 1872, together with one American, they established a profitable drugstore [general store] in Ely. But they went separate ways some time later. From that time on Wojtishek has had his own store and thanks to his hard work it has flourished.”

At a later time later he (Ed: Josef Wojtishek) took advantage of an opportunity to join a grain store, where he successfully worked together with his co-partner for sixteen years. In 1888 he paid his co-partner for his portion of the store and since that time he has been the sole owner of the store.  Wojtishek became a wealthy man because in addition to owning the drugstore [general store] and grain store he is a stockholder in one bank in Cedar Rapids and for some time he was also its chairman. He also is the owner of 275 acres of great soil in Linn County.
He has a three living children. His son, Fr. J. Wojtishek, is a popular physician in Cedar Rapids and a daughter Marie works as a teacher in the public schools there. The youngest daughter, Anna, still lives with her parents.
However, Wojtishek is a cool-headed man who always works with invincible energy. This is the reason for his successes in business and in farming, too. His wife is alive too and she likes to talk about their hard beginnings in this country that they overcame.
Below: Daughters, Anna Woitishek (left) and Marie Woitishek (right) 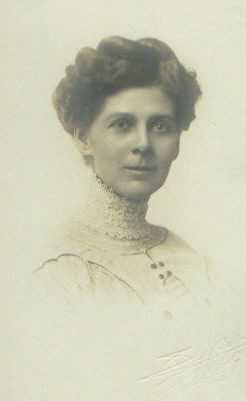 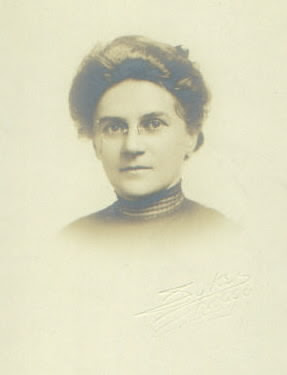