The new town of Western

This is an account of the new town of "Western College", later known as the town of Western, in College Township, Linn County. It is interesting to find out that less than a half mile from the new town there was once a prairie, known as Grand Ridge Prairie.

From:  The Massachusetts Teacher and Journal of Home and School Education, Volume 9, 1856 (Google eBook)

1856
We have received the three first numbers of the Western College Advocate and Miscellaneous Magazine, a neat little monthly, printed at Cedar Rapids, but hailing from the town of Western, Linn County, Iowa. Western, as we learn from the magazine itself, is a town four months old last August, and then containing sixteen houses and a population of one hundred souls. It has been fixed upon as the site of a College by the Conference of the " Church of United Brethren" of Iowa — a sect we never heard of, but surely they have a good name, and we rejoice to see that they are open opponents of that deadly enemy of all that is good in Christian education, chattel slavery. The situation is thus described :

Western College — Western College is situated near the south line of Linn County. From the town of Cedar Rapids it is 7 ½ miles south and 1 mile east to the town plat of the College, and from Iowa City it is 13 miles north and 5 miles west. Its exact location is 200 acres in the south-east corner of section 34, township 82, north of range 7, west of the fifth principal meridian. Less than a half mile from the town are 160 acres of fine prairie, intended for the College farm, and in the large grove on the south are 120 acres of fine timber, also belonging to the College.

This prairie is known as Grand Ridge Prairie, and it is certainly one of the most beautiful in Iowa. The soil is rich and productive; the land is gently rolling, giving a beautiful variety to the scenery, and freeing the country from those swamps and marshes, so productive of disease.

The location is such as to give a commanding view of the surrounding country. On the west can be seen Benton county, with her numerous groves of timber; on the north, far beyond Cedar Rapids, the meanderings of that beautiful crystal stream, the Red Cedar, are plainly marked in the horizon by the woodland along its margin; on the north-east and east Hoosier Grove and Fackler's Grove intervene; but in the south east, away across the beautiful farms of Johnson and Cedar counties, the meandering outlines of the river are again seen slipping against the sky. For many miles on the south and south-west, the view of the Iowa timber is uninterrupted.

The village of Western is improving rapidly. Scarcely a week passes but that one or more houses are reared up. The citizens have recently organized a fine and flourishing Sunday School. The interest which is taken to secure a library and the efforts made upon the part of the teachers to improve their minds in the art of teaching and the science of music, warrant us in believing that the school will prove a great blessing to the village and neighborhood.

Some of the citizens have also organized a club, called " he Western Literary Society," for the purpose of mutual improvement in debate, declamation, and composition.

Our religious meetings are kept up regularly twice or three times a week. They are generally well attended.
A large sum has already been subscribed, and we should judge that the prospects of the undertaking were very flattering.

What a picture of American enterprise! A town not twelve months old, in a State not yet twelve years old, and schools, churches, and colleges rising up in the midst of the forests and the prairie! One cannot doubt of the future character of a population growing up under such auspices. We bid our friends a hearty God-speed, and advise all emigrants to look on the map for Western, Linn county, Iowa. 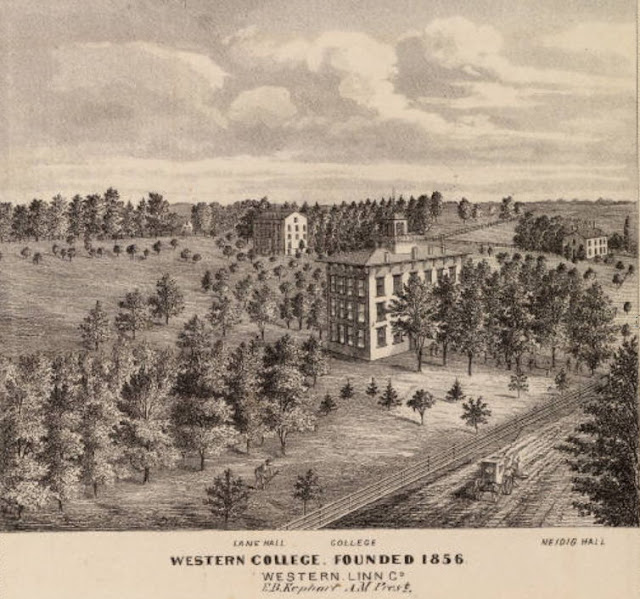 NOTE: The college at Western did not last, and after it closed and moved to Toledo, Iowa, in 1881, the town of Western no longer thrived, especially since the railroad, for which they had fought to come to Western, went through Ely instead.

The removal of the college from its original location to its present most desirable situation was an event of the greatest importance to the institution. The first location had long been felt to be an unfortunate one, and a desire was widely entertained to secure for it a more favorable position. But the removal of a college from one place to another is always a difficult undertaking, and is seldom attempted. The step was, however, at last fully resolved upon, and in the year 1881, a quarter of a century from the time of the founding, the transfer was made to the beautiful city of Toledo, in the same State. Preparatory to this suitable grounds were secured and the necessary buildings erected.

From Wikipedia:  Leander Clark College, originally named Western College, was a college in [Western and Toledo] Iowa, United States. It operated from 1857 to 1919, when it was absorbed into Coe College.   See more.