In 1880 Joseph Holets established a harness shop on the west side of Walker Street near the corner of Downs Street.  Expansion of the warehouse soon housed an implement dealership.

FROM THE ”ELY ECONOMY", an Ely, Iowa newspaper.  The paper has no date, but I believe the date would be about 1897 or 1898. (Since this is my husband's family I have made a few changes to the article with family knowledge.- Barb Horak)

The Holec (Holets) family came to the United States in the fall of 1857. Joseph Holets was born in 1859 on their farm about a mile south of Swisher, Iowa,and was raised there until 17 years old, attending school during the winter terms.  At that age he began his apprenticeship with J.W. Pauba, of Solon as a harness maker where he served two years and then worked for J. E. Dolezal at Ely as a journeyman for 18 months, till the death of Mr. Dolezal.

He worked for his brother, John Holets, of Fairfax for two and a half years.  In September 1880, he married Miss Katherine Sedlacek at Danforth (later Swisher) and in November began business for himself in Ely where he has remained since and prospered in this line of business.  Mr. Holets is an enthusiastic member of the AOUW (Ancient Order of United Workman) in which he holds the master’s degree.  He and his family are members of the Bohemian Reformed church near Ely.  Mr. Holets is one of the respected and substantial business men of Ely who are doing not only for themselves but for their fellow men what they believe to be right.  His business as a harness maker is prosperous and his customers are all over this region.

JOSPEH HOLETS OF ELY KILLED BY TRUCK
Joseph Holets, 79, retired Ely business man, was killed at 5:40 p.m. Friday, when run over by a truck, which Leonard Reyhons, 23, was backing into Ely's main street from an alley beside the retail store he manages.

Mr. Holets, who would have been 80 May 7, suffered a crushed chest and broken back.  Following an investigation with Deputy Sheriff Harlan Snyder, Dr. B. L. Knight, coroner, said there will be no inquest.

Accompanied by Frank Kos, 78, and J. C. Dvorak, 78, both Ely men, Mr. Holets had left the post office just across the street from the accident scene.  Kos and Dvorak started east on the north side of the street and Holets was walking across the road southward, apparently scanning newspaper headlines as he entered the mouth of the alley, witnesses said.  Acquaintances said Mr. Holets was hard of hearing.

Mr. Holets was born about one mile south of Swisher.  For a half-century he operated an implement and harness store at Ely.  He and his wife, Katherine, who survives, would have passed their sixtieth wedding anniversary next September.  He was affiliated with the Masonic lodge at Fairfax.

Joseph's son, Joseph W. Holets was a banker in Ely for many years.

Cedar Rapids Gazette
Tuesday, 3 April 1984
Joseph W. Holets, 97, of Ely, manager of First Trust and Savings Bank in Ely from 1943 until retiring in 1965, died Monday morning at St. Luke's Hospital of heart failure.
Born July 17, 1886, in Ely, he married Ida Barta on Nov. 28, 1911.  She died in 1965.  He farmed and served as secretary and treasurer of the Ely Livestock Shippers Association, was secretary of the Board of Education, served on election boards and the Ely Volunteer Fire Department, and also as township clerk and town treasurer.  He was a member of Ely IOOF Lodge 581, Linn Encampment 49, Canton Rainbow Patriarchs Militant 22 of Cedar Rapids and Posledni Taborita 16 of Ely, and a charter member of Ely Rebekah Lodge 56.
Surviving is a daughter, Gladys Holets of Ely.

Gladys Holets served as a clerk in the Ely bank for many years.

Joseph W. Holets built a brick house where his father's harness and implement business had been. He,his wife, and his daughter, Gladys, lived there for many years. The house still stands today on the west side of Walker Street. 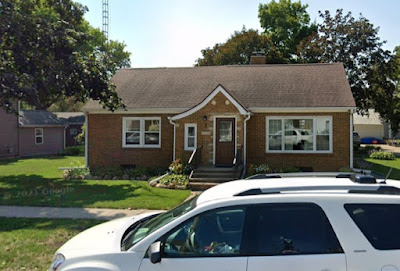 The Ely Community History Society was initially funded by a large grant from the Gladys Holets Estate, for which we are grateful!